Since the launch of Science Gossip on March 4, 2015, we’ve had an overwhelming response from contributors! Over 3,000 people have added over 140,000 classifications to the pages of Victorian periodicals available through the project.

One of our favorite outcomes have been the incredible insights and discoveries Science Gossip contributors have shared with us. For instance, @SiobhanLeachman shared on Twitter her discovery that you can find live bats and frogs when you dig coal shafts! Or how about jules’ discovery of an 1829 article about riding on the back of crocodiles?!

There are countless more discoveries to be made in these fascinating historic natural history articles. Sometimes, it is by combining information across multiple Victorian journals that we can uncover the most impactful stories. Case in point? The amazing contributions of fossil collector and naturalist Mary Anning, whose discoveries (sometimes credited to her, sometimes not) are documented within 19th journals, including some contained within the Science Gossip project: the Magazine of Natural History and the Quarterly Journal of the Geological Society of London. 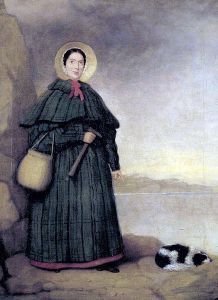 Portrait of Mary Anning with her dog Tray and the Golden Cap outcrop in the background, Natural History Museum, London. This painting was owned by her brother Joseph, and presented to the museum in 1935 by Miss Annette Anning.

Mary Anning was born on May 21, 1799, in the seaside community of Lyme Regis, in the south of England. From the outset, she had an eventful life; she was named after an older sister who perished in a house fire, and at the age of 14 months, young Mary was the sole survivor of a lightening strike that claimed three members of her community. Her father, Richard, was a cabinetmaker, but also a fossil collector who sold his finds to the visitors of Lyme Regis beaches. When he died in 1810, the Anning family fell into debt. It was in 1811 that Mary’s older brother Joseph found the skull of a “crocodile” in the cliffs near their home, prompting Mary to investigate further. Nearly one year later, she had located the complete skeleton and hired help to free the fossil from the cliff. This specimen is usually considered the first Ichthyosaurus to be found (although reexamination of the historical record shows that other specimens were discovered earlier), and its description and image were published in the Philosophical Transactions of the Royal Society in 1814. Noticeably absent from this paper is any credit due to Mary Anning or her brother.

Image of Mary Anning’s Plesiosaur from Transactions of the Geological Society of London. ser. 2 vol. 1.

Mary sold the famous Ichthyosaur skeleton for a handsome sum, following in her father’s footsteps and quickly becoming the family breadwinner. In December 1823, Mary’s next major discovery came to light; it was the nearly complete Plesiosaurus described in the Transactions of the Geological Society of London; once again, Mary Anning is not credited by name in the paper. 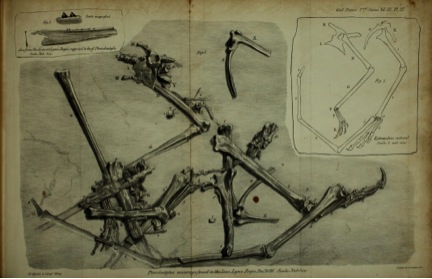 Image of Mary Anning’s Pterosaur from Transactions of the Geological Society of London. ser. 2 vol. 3.

It is around this time that Mary Anning became an object of fascination to the scientific community. Visitors came to Lyme Regis to meet her, including scientists and collectors from around Europe and the United States. The next decade continued to be a productive one, as she found the first Pterosaur ever discovered in Great Britain; the flying reptile captured the public imagination and her fame spread outside of scientific circles, possibly because she was named in the paper. She also unearthed more complete Plesiosaur and Ichthyosaur specimens, correctly identified coprolites as fossil feces, discovered a remarkable fossil fish named Squaloraja, a creature illustrating the link between sharks and rays, and found specimens of the invertebrate Belemnosepia with intact fossil ink sacs, containing viable ink that could be used for drawing. By the late 1820s, Mary’s work was recognized and her new discoveries often published by William Buckland, the great geologist who described the bones of the giant reptile he dubbed Megalosaurus, which we now recognize as the first published description of a dinosaur.

Mary’s fame continued to grow, and she continued to operate her fossil shop in Lyme Regis, selling significant specimens to scientists, collectors, and museums. In 1838, she was recognized by the British Association for the Advancement of Science with a special yearly stipend of £25. In 1846, the Geological Society of London arranged further funds for her welfare. Sadly, in 1847, Mary Anning died of breast cancer at the age of 47. She was honored with an obituary published in the Quarterly Journal of the Geological Society of London, a particularly remarkable tribute given that the Society was not open to women at this time.

Despite Mary’s significant contributions to science, there is only one item known to be authored by her in the published literature, a letter she wrote to the Magazine of Natural History, published in 1839.

As the world celebrates Women’s History Month in March, we salute one of history’s often-overlooked early women in science. Piecing together Mary Anning’s contributions to the field through Victorian journals demonstrates the important historical, not to mention scientific, value of these periodicals.

What discoveries will you uncover as you page through the books on Science Gossip? With your help, we may be able to uncover new insights into unknown authors and illustrators – like Anning. There’s a vast treasure trove of information just waiting to be unearthed!