In addition to furthering research, one of the benefits of classifying on Science Gossip is the chance to see some fantastic Victorian illustrations. Just because an image was intended for scientific purposes, did not preclude it from being an aesthetic object: there was plenty of overlap between scientific and artistic depiction in the Victorian period. 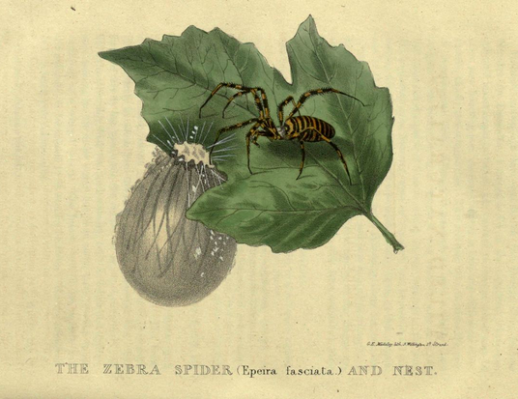 Some of the most immediately eye-catching illustrations are those with brilliant colour schemes. It took less than a week for volunteers to find the brightly coloured illustration used for the background of the project, as covered by a Daily Zooniverse post.

However, there are a wealth of other coloured images in the pages that constitute Science Gossip, including everything from #graphic_microscopy to #heraldry, and quite a bit in between. 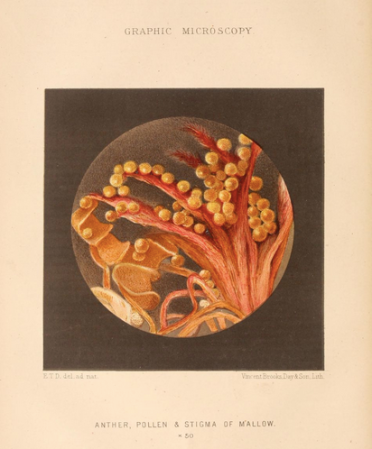 While many illustrators and engravers used flashes of colour for decoration and to portray important scientific information, skilled illustrators working in black and white were also able to capture the natural beauty of their subjects. From the Amazon Rainforest and squirrels to some rather intriguing depictions of walruses, citizen scientists and professional sketch artists captured the fine details of the natural world in their depictions.

As awe-inspiring as these illustrations are, some Victorians felt that they paled in comparison to the real world. J.G. Wood declares in his Common Objects of the Microscope (1861) that ‘no pen, pencil, or brush, however skillfully wielded, can reproduce the soft, glowing radiance, the delicate pearly translucency, or the flashing effulgence of living and ever-changing light [. . .] whose wondrous beauty astonishes and delights the eye, and fills the heart with awe and adoration.’ Even with this in mind, many of the warm and stunning illustrations that volunteers are finding are, as user yshish noted about the botanical drawing below, “Beautiful!” 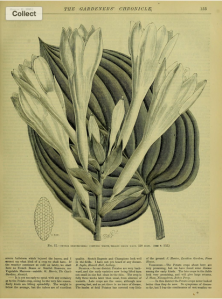 Science Gossip classifiers have also discovered a wealth of decorative elements within the pages of scientific periodicals. While these decorated capitals and banners are not considered illustrations for the purposes of Science Gossip classifications, they liven up otherwise text-heavy pages and show how Victorian scientists appreciated a bit of whimsy and ornamentation, just like their predecessors in print and manuscript in the centuries before the birth of citizen science. 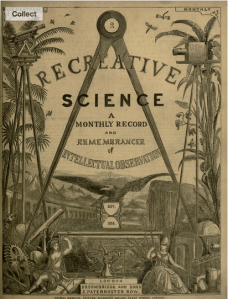 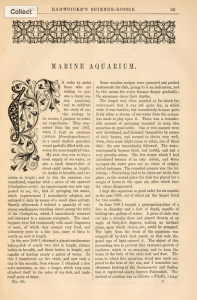 There are plenty more illustrations to be found and classified on Science Gossip, and with your help we can continue to bring them to light!

As one recent Daily Zooniverse post mentioned, Science Gossip users have been collecting some fascinating examples of 19th century #ads mixed in with scientific illustrations. While these advertisements are not the types of illustrations that the Science Gossip research team is focused on, and thus might seem unrelated, they highlight some of the intriguing connections between commercialism and citizen science in the Victorian period.

Some of the most common advertisements found so far by Science Gossip volunteers include segments selling microscopes and slides, mineral and fossil collections, plants and bulbs, “hand cameras,” and binoculars. As various industries grew during the Victorian period, many scientific tools became easier and cheaper to obtain. Purchasing these tools from sellers advertising in magazines, including Hardwicke’s Science Gossip, was one way citizen scientists of the past could participate in the scientific discussions and discoveries of their day. Horticultural builders also frequented the pages of periodicals such as The Gardener’s Chronicle, showing that some readers went so far as installing specialist buildings with newly devised hot water heating systems to support their own scientific interests!

Victorian advertisements were often directed specifically at women, showing how gender played an important role in 19th century citizen science. Aside from announcements for dresses and soaps, magazines such as The Gardeners’ Chronicle included lists of books for purchase aimed specifically towards women, including Mrs. Loudon’s Ladies’ Companion to the Flower Garden and High-Class Kitchen Gardening. These advertisements suggest that women were reading scientific periodicals and engaging with the wider network of citizen scientists. They also evidence gender bias in the types of science women might be expected to perform.

Aside from scientific advertisements, the magazines in the Science Gossip project include some fascinating pieces selling everything from camomile pills and spectacles to life insurance and cocoa powder. Thanks to the help of our volunteers, these and other advertisements are coming to the surface and finding new life in the Zooniverse community, even if they will ultimately be excluded from the research data set. Be sure to classify these ads as non-images, but feel free to tag them using #ads on Science Gossip Talk and keep the conversation going!

Science Gossip investigates the making and communication of science in both the Victorian period and today. This project is born from a collaboration between an Arts and Humanities Research Council project in the UK, called ‘Constructing Scientific Communities: Citizen Science in the 19th and 21st Centuries’ http://conscicom.org/ (ConSciCom) and the Missouri Botanical Garden who are providing content from the Biodiversity Heritage Library (http://www.biodiversitylibrary.org/).

The BHL has digitized millions of pages of historic literature on biodiversity from the 1400s to today. Hidden within these pages is a treasure trove of illustrations that you can help identify and classify. The data you create by tagging illustrations and adding artist and engraver information will have a direct impact on the research of historians who are trying to understand why, how often and who made images depicting a whole range of natural science topics during the Victorian period.

In this post, Dr. Geoffrey Belknap, historian of Victorian Science, explains the links between scientific investigation in the past, and the work of Citizen Scientists today:

Victorian Periodicals are endless fun. They are loaded with odd stories and illustrations made by people whose contributions are not widely recognized, but whose work was important nonetheless. Unlike books, periodicals were usually bought, read and then discarded, unless they were purchased by a library and preserved for posterity like those in the BHL collections. While many of the volumes I study are held in public libraries, sometimes they reveal traces of past readers. One day, while perusing a periodical, I encountered a fern specimen pressed between the pages of two issues. It was placed there by an as yet unknown (and likely never to be known) collector. For a historian of periodicals, this is treasure indeed! 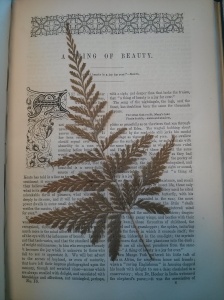 Periodicals are notoriously bad at retaining traces of their readers – or, in this case, users. The placement of the fern on a page – incidentally entitled “A Thing of Beauty” – acts as a reminder for me in my research. These texts and the past that they represent are three-dimensional: they held knowledge in terms of articles and illustrations, but readers could add to this by using the pages of periodicals to their own ends.

The periodical containing the fern is called Hardwicke’s Science Gossip: an illustrated medium of interchange and gossip for students and lovers of nature, and–as you’ll have guessed–it is the inspiration for this project. The aim of Science Gossip, then as now, is to bring together a range of people eager to engage with scientific discovery and research. The most enticing aspects of Science Gossip, for both Victorian and modern readers, are the illustrations dotted across almost every page of the journal. What a reader could see on any given page ranged from Diatoms to imagined 17th-century apes, and everything in between.

The illustrations constituted an essential part of Science Gossip’s appeal, which in turn encouraged a wide range of contributors. Over a 15-year period – beginning in 1865 when the periodical was founded – Science Gossip published work by over 550 individual authors. Finding out more about the social, economic and scientific position of these authors will be a central part of my research over the next three years. One of the challenges I face is that the authors for Science Gossip are largely unknown. Help me and my collaborators at Zooniverse and the BHL unlock these illustrative treasures.   Let us know who created them, their subject matter and any particular species and other information they portray. Your work will help us understand what constituted a nineteenth-century citizen scientist, and indeed a twenty-first century citizen scientist!